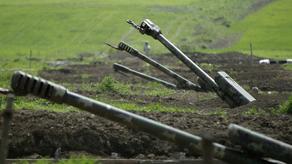 The Presidents of Russia, the United States, and France - Vladimir Putin, Donald Trump, and Emmanuel Macron - in a joint statement called on Azerbaijan and Armenia's leadership to resume talks on Nagorno-Karabakh without preconditions.

"We call on the leaders of Armenia and Azerbaijan, in good faith and without preconditions, to immediately resume talks on the settlement with the assistance of the OSCE Minsk Group Co-Chairs," reads the statement.

The presidents of Russia, the United States, and France, Vladimir Putin, Donald Trump, and Emmanuel Macron, believe that hostilities in Nagorno-Karabakh must cease immediately.

"We call for an immediate end to hostilities between the armed forces of the participating countries," the three leaders said in a statement.

"Russia, the United States, and France will prepare a joint statement on the situation in Karabakh," Russian President Vladimir Putin informed the Permanent members of the Security Council.

"The meeting paid special attention to the developments in Karabakh, and once again extreme concern over the ongoing hostilities was expressed," Dmitry Peskov, the Kremlin Press Secretary, stated.