Russian editor dies after setting herself on fire 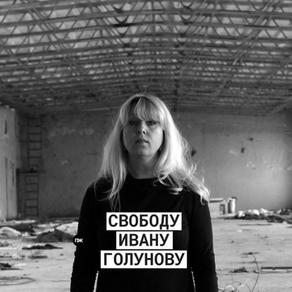 A Russian news editor has died after setting herself on fire in front of an interior ministry office in the city of Nizhniy Novgorod.

Irina Slavina earlier wrote on Facebook: "I ask you to blame the Russian Federation for my death."

Authorities confirmed her body had been found with severe burns.

Slavina said on Thursday police had searched her flat looking for materials related to the pro-democracy group Open Russia. Computers and data were seized.

Footage has emerged apparently showing the moment she set herself on fire on a bench in Gorky Street, where the interior ministry in Nizhny Novgorod is situated.

In the video, a man is seen running to a woman to help extinguish the flames. She repeatedly pushes him back as he tries to use his coat to stop the fire, before she eventually falls to the ground.

Russia's Investigative Committee confirmed that Irina Slavina, who leaves behind a husband and daughter, had died but denied any connection to a search of the journalist's flat.