Russian TV host Pozner: Georgian authorities have not apologized to me

Russian TV host Pozner: Georgian authorities have not apologized to me 5 April, 2021  21:26 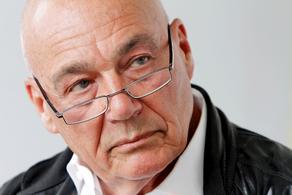 ''Georgian authorities have not apologized to me after the Tbilisi incident,'' Russian TV host Vladimir Pozner told journalists.

No one has apologized to me; however, I know the Georgian prime minister said he was sorry. Peskov told me,'' Pozner said, adding that he does not intend to comment on this issue and remember the incident in the future.

Additionally, Vladimir Pozner wrote in his post on social media that he had decided to leave Georgia not to jeopardize his friends' lives; however, in his words, he does not hold a grudge against Georgians and plans to visit Georgia again.

Vladimir Pozner arrived in Georgia to celebrate his birthday.

A protest followed the Russian journalist's visit to Tbilisi.

Adjara Group, which owns The Rooms Hotel, where Pozner and his guests stayed, published a special statement, saying that they supported protesters and condemned occupation.

The Ministry of Internal Affairs states that Vladimir Pozner is a citizen of America and has not violated the law on occupation.

The labor inspection fined the Vinotel hotel, in which Vladimir Pozner and his friends had dinner.

Vladimir Pozner and the Russian delegation left the hotel through a police cordon.

People pelted the Rooms Hotel, where Russian journalist Vladimir Pozner and his guests were staying with eggs.

Russian TV presenter Vladimir Pozner, who returned to Moscow, denied that he had been fined for violating Georgia's coronavirus restrictions.

Pozner says that he will definitely pay another visit to Georgia.