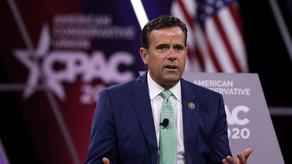 The Senate on Thursday confirmed U.S. Rep. John Ratcliffe, R-Heath, as director of national intelligence, elevating him to a cabinet-level position in the Trump administration and creating a vacancy for a congressional seat in Texas.

The confirmation vote was 49-44 and brought a relatively smooth conclusion to a nomination process that started off rocky. Ratcliffe was first tabbed by President Donald Trump for the position, which oversees the nation's 17 intelligence agencies, in July. But his path to becoming director of national intelligence initially hit a snag when the The Washington Post reported that a claim on Ratcliffe's website that he arrested "over 300 illegal immigrants on a single day" as a federal prosecuting attorney was an exaggeration. He also faced questions over whether he overstated his role as a federal prosecutor in a terrorism financing case.

Ratcliffe withdrew from consideration within a week as questions were raised about his credentials and whether he inflated parts of his biography. But Trump then nominated him six months later, calling him an "outstanding man of great talent." Ratcliffe has been a vocal ally for Trump, defending the president during impeachment hearings in 2019. He was reportedly previously considered as a potential replacement for former Attorney General Jeff Sessions.