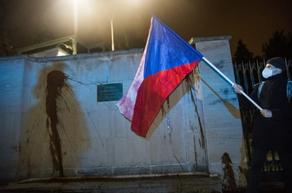 Prague police detained seven people who poured ketchup over the fence of the Russian embassy in the Czech capital, foreign media say.

According to media reports, at night the police went to a call to the square where the Russian diplomatic mission is located. Seven people were detained, who are suspected of causing deliberate damage to property. All of them were taken to the nearest branch.

The action took place after the head of the Czech Foreign Ministry Jan Hamacek announced the decision of Prague to expel 18 employees of the Russian embassy, who, according to the local special services, are officers of the Russian intelligence service.