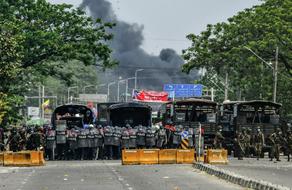 The US Embassy in Myanmar reported that the US Cultural Center in Yangon, the country's biggest city, was shot.

The shooting left no casualties.

The country is facing a tragic status of political instability after the military coup that occurred last month.

Protesters against the February 1 Myanmar coup stormed the streets of Yangon, Mandalay, and other towns, defying a warning they could be shot "in the head and back" as the country's generals celebrated Armed Forces Day.

"Today is a day of shame for the armed forces," Dr. Sasa, a spokesman for CRPH, an anti-junta group set up by deposed lawmakers, told an online forum.

"The military generals are celebrating Armed Forces Day after they just killed more than 300 innocent civilians," he added, giving an estimate of the toll since the first protests erupted weeks ago.

Reports say when the security forces launched shooting at the protestors outside a police station in Yangon's Dala suburb, at least four people were killed, and at least ten people were wounded.