Skeleton of a 300,000-year-old elephant unearthed in Germany - PHOTO 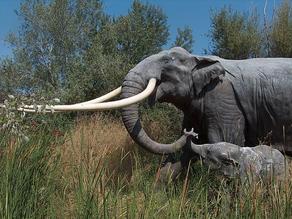 An almost complete 300,000-year-old elephant skeleton with eight-foot tusks has been recovered from a former mine in Germany.

The Eurasian straight-tusked elephant, Palaeoloxodon antiquus, died by the shores of an ancient lake before its corpse was scavenged by carnivores.

Human ancestors are thought to have eaten from the carcass, as 30 small flint flakes and two long bones used for sharpening tools were found among the remains.

It was then covered over by water-saturated sediment, which has preserved it since the start of the Middle Palaeolithic era.