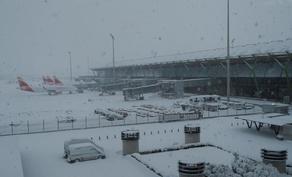 Rescue services reached 1,500 people trapped in cars, while skiers glided down Gran Via, normally one of the busiest streets in the capital. Other Madrid residents used the freak blizzard to snowboard down the road or pelt each other with snowballs.

A man and woman who were traveling in a car drowned after a river burst its banks near Malaga, southern Spain, and two homeless people froze to death, one in Madrid and the other in the eastern city of Calatayud, authorities said.

Responding to the events, King Felipe VI and Queen Letizia tweeted: “The royal family would like to express their sorrow for victims of the storm ... and ask for extreme caution against the risks of accumulation of ice and snow.”