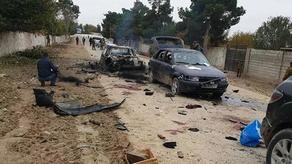 “The attack on the border crossing point located in Uzbekistan was organized by the Islamic State”, State Committee for National Security of Tajikistan reported.

According to the agency, the attackers arrived from Afghanistan.

The Committee revealed that during the interrogation, the detainees said they were planning to carry out terrorist attacks in Tajikistan.

The attack on the border between Tajikistan and Uzbekistan took place today. According to the police press center, 20 masked men were involved in the attack. 15 of them are liquidated and 5 arrested.