The monument of a confederate general destroyed in the USA 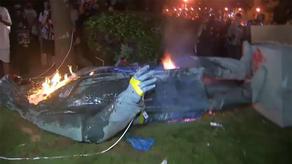 The demonstrators wrapped two ropes around the statue to pull it down.

The statue was then doused with lighter fluid and set on fire.

Then a group of about ten police officers approached and put the fire out with fire extinguishers.

President Donald Trump tweeted that police were not doing their job.

Reportedly, the only monument to Pike was erected in 1901. In total, there are 19 monuments of confederates in the region.

A number of monuments are destroyed in protest over George Floyd's death in the United States. The statue of Christopher Columbus is also destroyed by the leftist activists that blamed the founder of the United States in the genocide of locals.