The number of injured in Beirut protest to increase 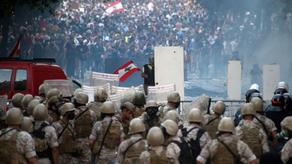 Aljazeera reports that the number of injured people in the anti-government protest clash in Beirut has increased to 728.

Reminder: An anti-government protest following the massive explosion on August 4 resulted in clashes between the protesters and law enforcers. The explosion's cause was 2,759 tons of ammonium nitrate stocked in irrelevant conditions in a warehouse at the city port. The explosion caused the death of 154 people, and over 5000 are injured.