The primary suspect in the George Floyd case session 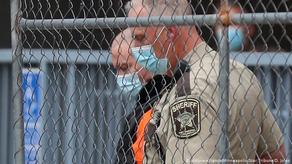 Reportedly, Chauvin did not attend the previous session watching the processes from the prison.

Prosecutors say Chauvin used to exercise the maneuver of strangling suspects on the detaining stage since 2014. In particular, he had used the power in the procedure of seven arrests.

According to the information, the attorneys of all four accused requested individual hearings for their clients. The suspects accuse each other in the murder of George Floyd.

One of the suspects, the publication reads, was released for bail.