The second round of the presidential election in Croatia 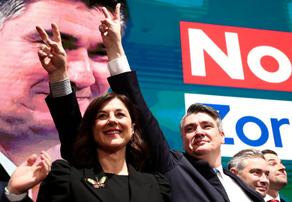 Croatia is electing the Head of the State among two candidates. During the elections held on December 22, President Kolinda Grabar Kitarović had almost 26.65%, the left-wing former prime minister Zoran Milanović led the field with nearly 29.55% of the votes in preliminary returns.

The leader of the opposition party is pro the cooperation with Western Europe and the USA. Milanović is against the increase of the President’s rights; the significant part of his program is covering paid but accessible health care. Besides, the social-democratic party Leader plans to fight the corruption and transfer to the euro currency.

Grabar Kitarović, in turn, promises the population improvement of the social conditions and fight unemployment. Acting President supports the expansion of presidential rights and an increase of the military budget.

There are 6 500 voting centers in Croatia. The voting started at 07:00 and will be closed at 19:00. A total of three million 850 thousand citizens will participate in voting.

The pre-election pole failed to reveal the leader. Croatia is electing the President for five years.