Those killed on January 20, 1990 remembered in Azerbaijan 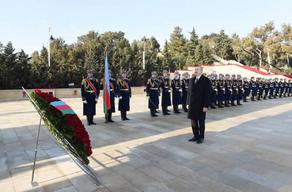 Citizens paid tribute to the memory of those killed on January 20, 1990, in Azerbaijan.

Ilham Aliyev, the President of Azerbaijan and Mehriban Aliyeva, the First Lady, laid flowers on the alley. They remembered the heroes who sacrificed their lives for the freedom and territorial integrity of Azerbaijan.

The Orchestra of the Ministry of Defense performed the State Anthem of Azerbaijan.

The officials and citizens of Azerbaijan honored the memory of those people who died for their homeland at Martyrs' Lane, where the eternal fire is lit.

Soviet troops opened fire on civilians during the protests on January 20, 1990, in the center of Baku, when they demanded the restoration of Azerbaijan's territorial integrity. More than 133 people were killed that night, 744 injured, and 841 arrested. Among the dead were juveniles, the elderly, and women.