Thousands of protesters march against Trump in Washington

Thousands of protesters march against Trump in Washington 18 October, 2020  17:56 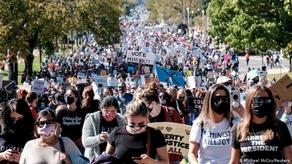 Thousands marched to the U.S. Supreme Court in Washington on Saturday to commemorate the late Justice Ruth Bader Ginsburg and protest President Donald Trump's rush to push through Amy Coney Barrett as her replacement, Reuters says.

As Reuters reports, the U.S. Senate Judiciary Committee has scheduled an October 22 vote on Barrett's nomination, a conservative appellate judge, over objections from Democrats that the confirmation process comes too close to the November 3 presidential election.

More than 26 million Americans have already cast their ballots for whom they want to sit in the White House for the next four years, Trump or his Democratic rival Joe Biden.

Demonstrators at the Women's March said they were angry that Republicans appear ready to confirm Barrett's nomination so close to Election Day after refusing to move forward Merrick Garland, the pick of former President Barack Obama, a Democrat, more than six months ahead of the 2016 election.