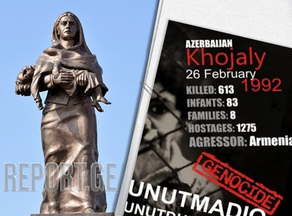 Azerbaijan commemorates the victims of the Khojaly massacre. Azerbaijani leader Ilham Aliyev and other high officials will lay a wreath at the Khojaly Genocide Memorial. Large-scale actions will be held in different countries worldwide with the motto "Justice for Khojaly."