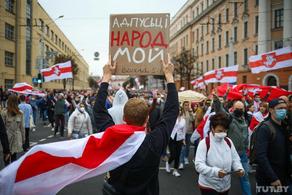 It says that some of the detainees have already been released.

The protests in Belarus are underway for 50 days.

Citizens state that the August presidential elections were held in violation of the rules.

The protesters demand the resignation of Alexander Lukashenko, the current president.

Besides, they also demand to punish those responsible for using force against protesters during the protest rallies.