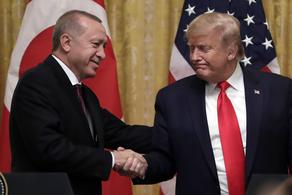 The Turkey President, Recep Tayyip Erdogan, and the USA President, Donald Trump, have discussed the current situation in the Idlib Governorate and the development in Libya in the telephone conversation. The Administration of the President of Turkey provided information regarding the above.

“Today, our President had a telephone call with his American colleague, Donald Trump. During the conversation, the parties agreed that the attacks of Syrian forces in the Idlib region are inapplicable. The parties shared ideas on how to end the crisis. The parties emphasized that ensuring the stabilization in Libya is one of the most important issues,” – the statement reads.

The President’s administration also stated that the Presidents of both countries are ready to resume the negotiations of a hundred-billion mutual trade agreement.