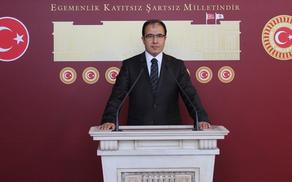 The term of office of the Turkish Ambassador to Azerbaijan Erkan Ozoral has expired.