Turkey in preparation to fly to the moon 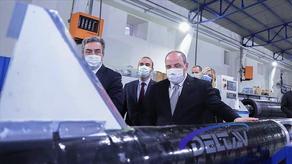 Minister of Industry and Technology in the Republic of Turkey Mustafa Varank inspected Delta V Space Technologies Inc.'s facilities, where a unique national hybrid rocket and unmanned spacecraft was developed, which to be sent to the moon for the 100th anniversary of the republic, Anadolu reports.

Reports say he was informed about the activities of Delta V., and about the technical features of the project of an unmanned spacecraft, which is to make a "hard landing" on the moon in 2023.