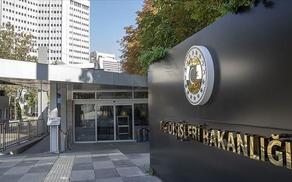 Reports say Ambassador Farazmand was invited to the Foreign Ministry on Feb. 28 after Iran'sIran's ambassador to Baghdad, Iraj Masjedi, demanded that Turkey leave troops from Iraq to halt military operations.

Turkey's expectation from Iran is to lend support to Turkey's fight against terrorism and not stand against it, the Iranian envoy was told, according to sources who underlined that both Iraqi and Iranian governments were fully aware that Ankara's objective was to eradicate the PKK terrorists.

Sources recalled that Turkey and Iraq agreed to secure the Iraqi territories by clearing the PKK from there.

Iranian ambassador was also told that all the militia groups should be taken under control of the Iraqi government in a bid to make the anti-terror fight in Iraq more effective.

Various armed militia groups in Iraq are under the control of Iran to destabilize the neighboring country.