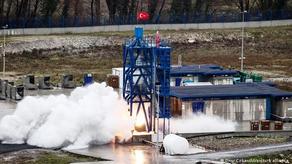 Turkey has successfully tested a hybrid rocket engine for a mission to the moon, DW reports based on the statement made by Turkey's Minister of Industry and Technology Mustafa Varank.

"Our preparations for the hard landing, which is the first phase of the lunar mission under the national space program, continue," Mustafa Varank said.

According to the Anadolu agency, the tests took place in the Black Sea region of Sile in the northeast of Istanbul province.

Ankara expects to carry out a mission to the moon in 2023 for the 100th anniversary of the republic.