Turkish President refuses to engage in talks with Khalifa Haftar 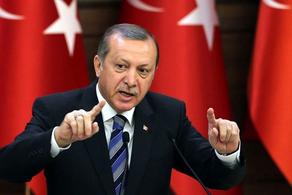 In his statement on the Libyan crises, Turkish President Recep Tayyip Erdogan said that he did not intend to engage in direct talks with terrorist Khalifa Haftar because, in his words, this was against his political views. After returning from Berlin, Erdogan said that his Russian counterpart told him that he would tackle all issues related to Haftar and suggested that Erdogan worked with the Government of Fayez al-Sarraj to resolve the issue.