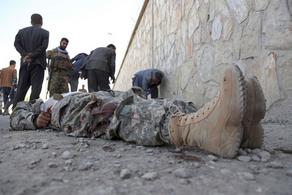 Two American soldiers were killed and six wounded in Afghanistan. A man dressed in an Afghan military uniform opened the fire in attack. The accident took place in the Nangarhar Province. No official information on details is spread by now.

Nangarhar division is under the control of the Taliban. According to last information, American diplomats and local militant groups negotiated the exit of foreign militaries from the territory in exchange for security.

At present, around thirteen thousand military men are dislocated in Afghanistan, the majority of them from the USA and NATO.