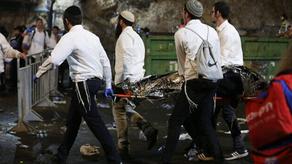 At least two people were killed on Sunday and dozens injured, some critically, when a grandstand seating area collapsed in a crowded synagogue in a Jewish settlement in the West Bank.

The incident occurred in Givat Ze'ev, north of Jerusalem, in a synagogue that was still under construction. Television footage from the scene showed the building was incomplete, with exposed concrete and boards visible.

Emergency medical teams reported 158 casulaties overall, including five in serious condition and nine in moderate condition. The remaining 142 are said to be lightly injured.

A police spokesman said 650 worshippers were in the synagogue at the time, for the start of the Jewish holiday of Shavuot.

The local government, police and fire and rescue services all dodged responsibility for approving the event, which was publicized over the past days, despite the fact the building was still under construction.