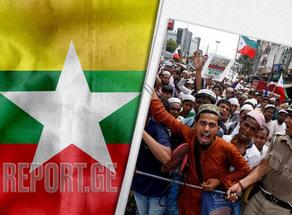 Two people were killed in Myanmar’s second city Mandalay on Saturday when police and soldiers fired to disperse protests against a Feb. 1 military coup, emergency workers said, the bloodiest day in more than two weeks of demonstrations, Reuters reports.

Protesters took to the streets in cities and towns across Myanmar with members of ethnic minorities, poets, rappers and transport workers among those demanding an end to military rule and the release from detention of elected leader Aung San Suu Kyi and others.

Tensions escalated quickly in Mandalay where police and soldiers confronted striking shipyard workers and other protesters.

Some of the demonstrators fired catapults at police as they played cat and mouse through riverside streets. Police responded with tear gas and gunfire, and witnesses said they found the cartridges of both live rounds and rubber bullets on the ground.

“Twenty people were injured and two are dead,” said Ko Aung, a leader of the Parahita Darhi volunteer emergency service.

One man died from a head wound, media workers including Lin Khaing, an assistant editor with the Voice of Myanmar media outlet in the city, and a volunteer doctor said.