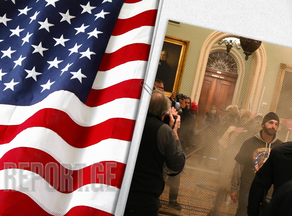 During standoffs among police officers and demonstrators, a person was shot inside the U.S. Capitol after the mob breached it, PBS reports.

As preliminary reports have it, a police officer has sustained a gunshot wound.

The U.S. Congress was to approve the presidential election results today, but supporters of President Donald Trump have breached the US Capitol to fight against the ceremonial counting of the electoral votes that confirmed President-elect Joe Biden's win.