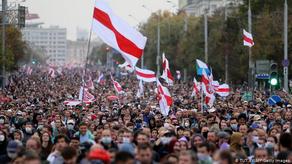 The U.S. Embassy in Minsk advised fellow citizens to avoid mass actions in Belarus in the light of the "people's ultimatum" presented by one of the opposition leaders Svetlana Tikhanovskaya to the current President of the country, Alexander Lukashenko, DW reports.

Following the newspaper, the ultimatum's compilers did not rule out strikes and blocking roads in case of non-fulfillment of their demands. Security agencies and protesters in this situation can use force during mass actions.

The U.S. Embassy in Minsk recommends that U.S. citizens stock up on food, drinking water, medicines, cash, and other essentials for at least three days and consider leaving Belarus.

Demands for a "people's ultimatum" include Lukashenko's announcement of his resignation, an end to street violence, and all political prisoners' release. The ultimatum expires on October 25.

Besides, if the ultimatum is not met, the protesters will stop using state banks' services, stop buying goods in state stores, and start blocking roads.

Let us remind you that the protests in Belarus began after the announcement of the presidential elections' results. Citizens believe that the August 9 elections were held in violation of the rules and demand the resignation of the current President of the country, Alexander Lukashenko.