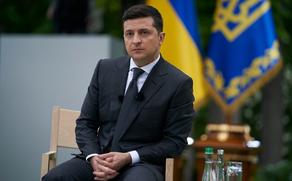 Ukrainian President Volodymyr Zelensky arrived in the Donetsk region, where he met with the military, Ukrainian media outlets report.

On December 6, Ukraine celebrates the Day of its Armed Forces.

The press office reports that the President honored the fallen soldiers' memory, congratulated the Ukrainian military on holiday, and presented them with state awards and gifts.

The armed conflict in the east of Ukraine began in 2014 after Crimea's annexation and protests on the Maidan. Official Kyiv and Western countries accuse Moscow of supporting the separatists.

On July 27, a complete ceasefire began in Donbas, agreed upon at a meeting of the Trilateral Contact Group. The decision was made by Ukraine, Russia, and the OSCE.