Ukrainian President visits the only survivor of September 25 crash 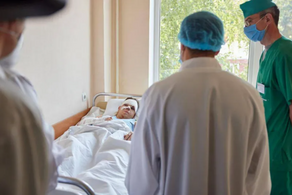 President of Ukraine Volodymyr Zelenskyy paid a visit to the cadet of the flight faculty of Ivan Kozhedub National Air Force University of Kharkiv Vyacheslav Zolochevsky, injured as a result of a crash of the An-26 military aircraft the night before near Chuhuiv, Ukraine's Presidential Administration reports.

The Head of State arrived at the Military Medical Clinical Center of the Northern Region, as emergency brigades hospitalized the injured cadet there.

The patient's condition is of medium severity.

Vyacheslav told Volodymyr Zelenskyy that everything happened very quickly, and it was unclear what was happening.

In his words, the cadets and crew were acquaintances and had already flown together.

The President asked whether the doctors and the victim had everything necessary for medical care.

"We wish you a speedy recovery," Volodymyr Zelenskyy told him.

Cadet of Ivan Kozhedub National Air Force University of Kharkiv Vyacheslav Zolochevsky is the only survivor of the An-26 military aircraft crash, which occurred during scheduled training flights on September 25, 2020, near Chuhuiv, Kharkiv region.

There were 20 cadets and seven crew members on board.