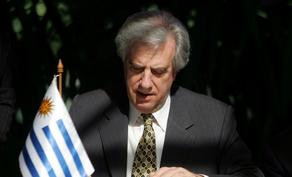 Former Uruguayan President Tabaré Vázquez has died at the age of 80 from lung cancer, his family announced on Sunday, Argentinian media say.

"With deep pain we communicate the death of our beloved father," his sons Alvaro, Javier and Ignacio Vázquez said in a statement.

The statement added that Vázquez died at 3am local time "due to natural causes of his oncological disease."

On Twitter, Alvaro Vázquez, who like his father is an oncologist by profession, said that "while he was resting at home, accompanied by some family and friends, Tabaré died because of his illness."