US Senate to discuss Trump's impeachment 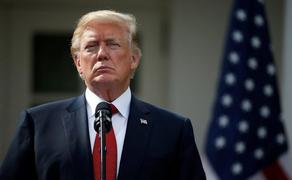 The US Senate will discuss the impeachment over allegations against President Donald Trump.

John Roberts, the Chief Justice of the United States and the Senate already took the oath. Roberts is the main judge in the impeachment process.

The United States House of Representatives supported the given case as well. Those against Trump think that he pressured Volodymyr Zelensky, the President of Ukraine, to start an investigation regarding Joe Biden and his family. The US president denies the allegations.