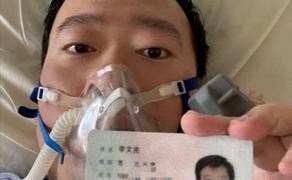 Chinese doctor Li Wenliang, one of the eight "whistleblowers" who tried to warn other medics of the coronavirus outbreak but were reprimanded by local police, is still under emergency treatment for coronavirus infection, the hospital where he is receiving treatment announced.


Li is currently in critical condition. His heart reportedly stopped beating at around 21:30. He was then given treatment with ECMO (extra-corporeal membrane oxygenation).


Li, a doctor who worked for Wuhan Central Hospital where he was also treated for coronavirus infection, initially warned his college classmates about the deadly virus in December 2019, urging them to take care. On December 30, he obtained a patient report suggesting SARS-like coronavirus positive signs. He then published information in a group chat saying that there have been seven confirmed cases of "SARS," according to one of his Weibo posts. On January 3, local police reprimanded him for spreading "online rumors" and required him to sign a letter of reprimand.

Since then, he returned to work, the post said. After he received patients infected with coronavirus, he began coughing on January 10, then having fever the next day. He was subsequently hospitalized on January 12.
Li was among eight Wuhan residents who were reprimanded by local police in early January for spreading "rumors" about the outbreak of the novel coronavirus, Global Times reports.

Wuhan Central Hospital said on Weibo that Li Wenliang is still under emergency treatment. GT reporters heard people weeping inside ICU. Li was one of the 8 whistleblowers who tried to warn other medics of the #coronavirus outbreak in Dec but were reprimanded by Wuhan police. pic.twitter.com/UgSLSCvaDK

The information they spread online a while ago said that the Chinese doctor who tried to warn others about the Wuhan coronavirus has died of coronavirus; however, the information proved false, and the doctor is still fighting for his life.

The number of confirmed cases globally stood at 28,275 as of Thursday, with more than 28,000 of those in China. The number of cases in China grew by 3,694, or 15%, on the previous day. There have been 565 deaths so far, all but two of which were in China, with one in the Philippines and one in Hong Kong.