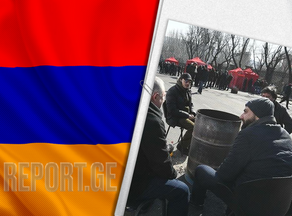 Opponents of Armenian Prime Minister Nikol Pashinyan spent their second night in a tent near the Parliament.

Two or three dozen people spent the night in the camp.

Police blocked the entrances to the camp, and a chain of law enforcement officers lined up along the parliament fence.

Protests in Armenia have been underway since November 10. The opposition blames Pashinyan for economic and social problems.