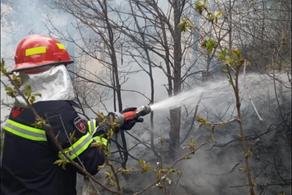 A forest fire broke out near the Shoka village of the Adigeni municipality which has already been extinguished.

According to the Public Security Management Center "112" of the Ministry of Internal Affairs of Georgia, heavy smoke was observed in the forest near the Shoka village of the Adigeni municipality.

"After several hours of continuous work, the Department of Fire and Rescue Forces employees managed to prevent the danger of fire spreading over a large area and subsequently completely extinguish the fire," the Emergency Management Service said.

Nobody was injured. Nine fire and rescue teams worked on the spot.