Goldfish who can drive: why scientists taught fish to navigate a watery tank on wheels 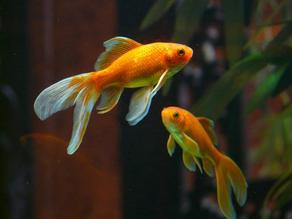 t might be an imaginary character straight out of a Dr Seuss book: The goldfish who could drive. But it’s real. Incredibly, Israeli researchers created a robotic car and report that they taught six fish – named after characters from Pride and Prejudice – to navigate it on land.

It’s all in the name of science, of course. The team had been dreaming up ways to test fish navigation for a while, according to Shachar Givon from Ben-Gurion University of the Negev, first author of a study published in the journal Behavioural Brain Research.

“Recently, we even ventured out to the coral reef of Eilat in an ongoing attempt to study navigation on a larger, more natural scale,” she says. “So we are always trying to challenge ourselves – and our fish. The idea of having the fish navigate on land seemed exactly like the impossible sort of challenge we like to tackle. Lucky for us it was not so impossible after all.”

The technical term for their challenge is “domain transfer methodology”, which means exploring whether a species can perform tasks outside its own environment. To pull it off, they drew inspiration from work that taught rodents and dogs to use an automated vehicle to reach a target and a previously designed contraption, “Fish on Wheels”.

First, the team, led by Prof Ronen Segev, created a watery tank on wheels that moved in response to the movements and orientation of the fish. Then they set about teaching the goldfish (Carassius auratus) how to drive it – much like humans learn to ride a bike or drive a car.

The fish first had to connect their own swimming movements to the movements of the vehicle so they could navigate it. Then they were given a destination: a pink target board in a foreign room that elicited a food reward when the vehicle touched it. A computerised camera system attached to this “fish operated vehicle” recorded and translated the fish’s swimming directions.

After several days of training, the fish successfully navigated the vehicle to the target from different starting positions in the room – even if they faced obstacles like false targets or hitting a wall. Some did particularly well. “Mr Darcy and Mr Bingley are the two fish featured in the different videos and were total rock stars,” Givon says.

Although previous studies have shown that fish can navigate within aquatic environments, the authors suggest this study shows the ability to navigate – which is essential for animal survival in many domains including for finding food, shelter and mates – is universal to all species and independent of the environment.