Stomach bloating: Warning symptoms to spot indicating your bloat may be cancerous 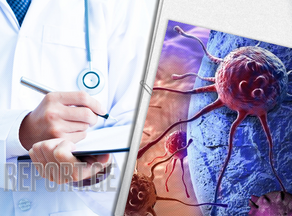 STOMACH bloating can sometimes be an indicator that something is not quite right. A problem with digestion or consuming the wrong kinds of food are the obvious causes but what symptoms should a person be aware of indicating it may be cancerous?

Stomach bloating may cause the belly to look puffy, swollen or even hard. A person may feel like they need to pass wind or go to the toilet more often than usual. Often, it can be related to eating certain foods, being under stressful times or occasionally it could signal cancer.

Most of us feel bloated from time to time, but if you feel/look bloated for three weeks or more, then you should see your doctor to rule out anything serious.

Other possible indicators include severe bloating, symptoms getting worse, or your bloating is accompanied with other symptoms.

Ovarian cancer is often known as the ‘silent’ gynae cancer, because people are unaware that it can cause symptoms, often becoming apparent until it is very advanced.

While most women with symptoms do present with advanced disease, this is not always the case.

Occasionally, symptoms can be due to an early-stage cancer.

Most of the time these symptoms which include a bloated stomach are because of a digestive issue, wrong types of food or other problems not related to ovarian cancer.