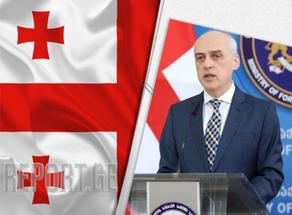 Georgian Vice-PM and Foreign Minister Davit Zalkaliani says that his phone conversation with Karen Donfried, the Assistant Secretary of State for European and Eurasian Affairs, once again demonstrates that Georgia is the closest and most reliable partner of the US in the region, and the two countries have a similar vision of the ongoing developments.

Davit Zalkaliani defines Russia being the signatory to the agreement, saying that every sovereign country is entitled to determine its foreign policy and make its own decisions as cynical. In his words, 'Russia's attempts to divide Europe and appropriate lands are unacceptable'.

''Russia requires the so-called security guarantees when it has been avoiding meeting its Georgia-related international obligations for years. Following our consultations with the US and NATO and after receiving supporting messages from them both publicly and behind closed doors, obviously, we have no plans to reconsider Bucharest's summit decision, and Georgia's integration into NATO is irreversible,'' Zalkaliani said, adding that Georgia and Ukraine have both been subjected to Russia's aggression, and Georgia will always show its solidarity to Ukraine.