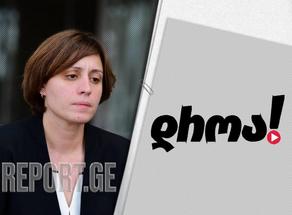 Droa opposition party has responded to Pres Salome Zurabishvili's decision to sign the document on the basis of which amendments are set to be proposed to the Organic Law of Georgia on the abolishment of the State Inspector's Service.

The statement says that by doing so, the president involved herself in the punitive campaign launched by the Georgian Dream against the legislative branch of the Georgian government and the State Inspector's Service.

According to the party, the move will entail grave consequences, with the opposition and the international community strictly condemning it.

The statement goes on to say that the president's refusal to exercise her rights under the constitution must be defined as the encouragemrent of the ruling party.

President Zurabishvili has signed the document giving the green light to the abolishment of the State Inspector's Service.

The Service is set to cease functioning on 1 March 2022.