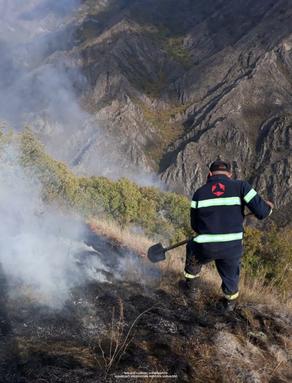 The fire location in the Ateni Gorge has been detected, according to the Emergency Management Center.

"After non-stop efforts, firefighters and rescuers managed to detect the hotspot in the Ateni Gorge. The fire spread through the rocky areas of the mountain, bushes, and shrubs. Rough terrain made bringing the heavy fire equipment to the hotspot impossible, which is why firefighters and rescuers with their tools carried out fire-fighting operations.

At this point, 30 firefighters have remained in the Gorge battling the blaze in some areas. The fire has burned around 2 hectares. The risks of fire spread do not any longer exist," the statement by the Emergency Management Center reads.