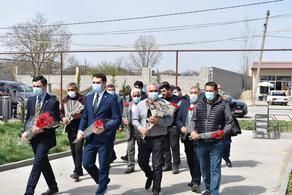 Employees at the Embassy from the Republic of Azerbaijan and Sagarejo Mayor Giorgi Erbotsonashvili have visited the Shahid Memorial commemorating the victims of the tragic developments of 20 January 1989 in Baku and 9 April 1989 in Tbilisi. The memorial is situated in the Iormughanlo village, the Sagarejo municipality.

They paid tribute to the victims of the 9 April and 20 January massacres.