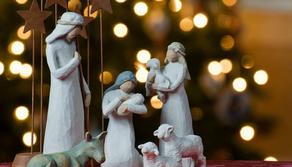 The Catholic world celebrates the nativity of Jesus Crist on 25 December.

Festive liturgies have been held in different Catholic churches in various regions of Georgia. However, the congregation was not allowed to stay in churches all night due to the pandemic.

His Eminence Bishop Giuseppe Pasotto performed Christian service at the Cathedral of the Assumption of the Virgin Mary in Tbilisi.

Together with Catholic Christians, representatives of different other convictions celebrate Christmas today.

Different Christmas traditions, for which foundation was laid in Italy, exist worldwide. In more than 100 countries around the globe, Christmas is considered a national festival.

Ecumenical patriarch Bartholomeus has published the Christmas Epistle in various languages, including Georgian.