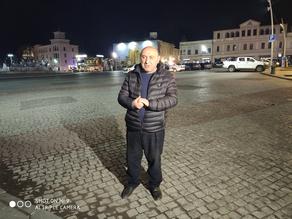 Co-chairman of the Free Georgia party Gogi Tsulaia has broken the curfew and declared disobedience as a form of political protest.

Mr. Tsulaia stresses that he expresses solidarity with Nika Melia and others subjected to 'politically motivated fines' and refuses to obey the government's illegal restrictions.

The politician says that he was not fined publicly, as, most likely, the fine will be sent to him to his home address.