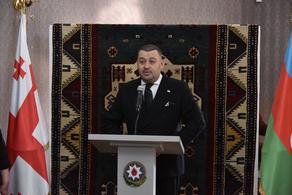 The Chairman of the Diaspora and Caucasus Issues Committee, Beka Odisharia, and MPs participated in the event preceding the Novruz Bayrami holiday.

At Mirza Fatali Akhundov Museum of Azerbaijan Culture, on behalf of the parliament, Mr. Odisharia congratulated Azerbaijani fellow-countrymen on the Novruz Bayrami holiday with the traditional Georgian sweets.

"I cordially congratulate the representatives of the nation to which centuries-old amicable relations link us on the Novruz Bayrami holiday. In my view, it is noteworthy that members of all committees and women represent the Parliament of Georgia today to demonstrate that amicable relations connect our countries. I want to proudly mention that in addition to presiding over the Diaspora and Caucasus Issues Committee, I serve as a majority MP of Krtsanisi and Mtatsminda comprising the Azerbaijani community with its members enjoying absolute equality. "Ethnic minority" must be a conditional notion in the light of the fact that we are all citizens of the same country. I express my gratitude to all public servants, philosophers, artists, culture experts, and others, like Fatali Akhundov and Akaki Tsereteli, who linked our nations politically, geographically, strategically, and culturally," Odisharia said, adding that all-out efforts must be made to bring the two countries' future generations together.

Members of the judicial, executive, and local government as well as the Azerbaijani ambassador to Georgia attended the event, which was organized by the Embassy of the Republic of Azerbaijan to Georgia and Mirza Fatali Akhundov Museum of Azerbaijan Culture.