How jailed Saakashvili managed to greet supporters from prison?

How jailed Saakashvili managed to greet supporters from prison? 21 October, 2021  21:21 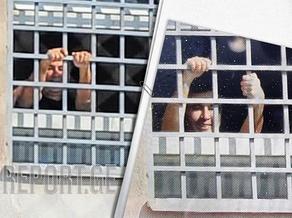 The Special Penitentiary Service provides information on how ex-president Mikheil Saakashvili managed to address his supporters from the prison facility denying reports that he was transferred to another cell.

According to the released information, Mikheil Saakashvili seized the opportunity to address his supporters outside the prison when he was taken for a shower. By doing so, according to the Special Penitentiary Service, he violated internal regulations. However, law enforcement officers responded to the illegal act immediately.

Jailed Saakashvili greeted his supporters outside the building from a prison cell today.

He declared a hunger strike 21 days ago.