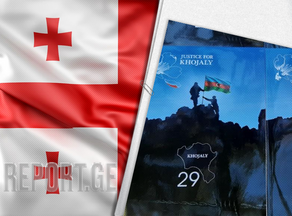 A journal titled "Justice for Khojaly" dedicated to the 29th anniversary of the massacre was issued in Georgia at the initiative of the Embassy of Azerbaijan and the Heydar Aliyev Foundation.

The English-language journal starts with the introduction by Leila Aliyeva, the Vice-President of the Heydar Aliyev Foundation and founder of the "Justice for Khojaly" International Awareness Campaign.

Additionally, the journal provides readers with information on the Khojaly tragedy and the de-occupied lands after the Patriotic War.

It also reads that The Sunday Times, Newsweek, The New York Times, Time, The Washington Times, and other global newspapers have released information on the genocide.

The Embassy plans to send the journal to the Georgian president, prime minister, the chairman of the parliament, the Administration of the President, the Cabinet of Ministers, and representatives of diplomatic corps and the international organizations accredited in Georgia.