Man forced to dig his grave, two charged for violence 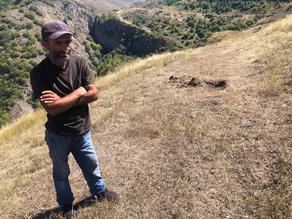 The prosecutor's office charged two persons with illegal imprisonment, the use of violence, and the fact of coercion, Georgia's Prosecutor's Office reports.

The incident took place in the Aspindza region. Two people kidnapped and beat a resident of the village of Khizabavri, and forced him to dig his own grave.

"The investigation by the Ministry of Internal Affairs showed that on August 22, 2020, in the village of Khizabavra of the Aspindza municipality, the persons, identified only as K.P. and I.G., unlawfully the liberty of M.M, to make him confess that he had stolen money from K.P.'s house. Afterward, they forced M.M. to sit into K.P.'s car, insulted him verbally and physically, beat him again forced him to dig his grave,'' Georgia's Interior Ministry reports.

Law enforcers detained those, identified as K.P. and I. G., based on the judge's order on August 25.

Violators face charges under articles 143, 126, 150 of the Criminal Code of Georgia. They face seven to ten years in jail.