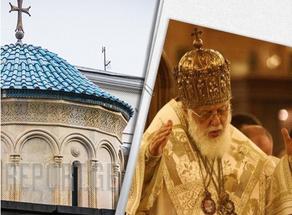 The Patriarchate of Georgia has responded to the leaked secret records obtained by alleged wiretapping.

The patriarchate says in its statement that the release of the records constitutes violence and arrogance, which is strictly punishable.

''Majority of the disseminated files seem to rest on a lie, while in some of them, the truth and lies are mixed (supposedly purposefully); some of them contain the truth. Precisely this truth constitutes the tool to present a lie to the public as the truth, or instigate doubts,'' the statement reads.

It goes on to say the files have allegedly been produced through unsanctioned methods, and they are half-true. Their accompanying documents may also be fabricated, especially when modern technology makes everything so easy today.

According to the statement, TV companies with a negative attitude to the church promote the dissemination of similar materials at the expense of hurting and insulting some people.

''We all remember the robust response by televisions and representatives of different NGOs when secret records involving them were released. However, now, when they themselves are doing so, the Charter of Journalistic Ethics is silent, the Public Defender is silent, NGOs and international organizations are silent, and representatives of our partner countries are also silent. The government has not responded adequately either.

According to the Criminal Code of Georgia, disclosure of information on personal life and secrets related to it, illegally keeping data, their use, and dissemination constitute punishable acts. Likewise, private conversations, correspondences, phone calls must remain private (Articles 157, 1571, 158,159).

Despite them being very well aware of the mentioned above, managers of different media outlets keep spreading offensive information of undetermined origin.

This constitutes an attempt to involve the church in pre-election developments, trigger disturbance, and create serious problems in the country.

Timely investigation of the recent crime is paramount. This is primarily in the national interests,'' the statement reads.