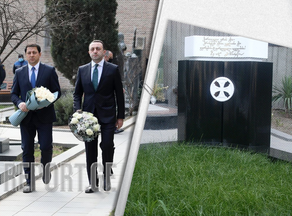 The Prime Minister of Georgia and the Speaker of the Parliament paid tribute to the memory of the first President of Georgia.

Irakli Gharibashvili and Archil Talakvadze visited the Mtatsminda Pantheon of Writers and Public Figures, where they laid flowers at the grave of President Zviad Gamsakhurdia.

The first president of Georgia, Zviad Gamsakhurdia, would have turned 82 today.