Police outside Amirani control situation while "Comets" is shown

Police outside Amirani control situation while "Comets" is shown 2 December, 2019  19:30 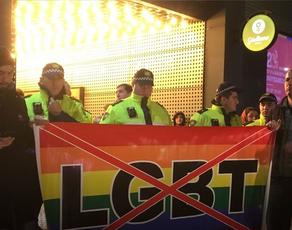 The police are controlling the situation outside the Amirani Cinema, where film Comets by Tamar Shavgulidze is being shown. The film is about two middle-aged women's love and friendship.The Georgian March Movement is protesting against the film, with its members saying that similar films aim at  promoting the LGBT community.